Asphalt is an aliphatic compound and in almost all cases a  byproduct of the oil industry. Some asphalt is manufactured from oil as the intended purpose, and this is limited to high quality asphalt produced for longer lasting asphalt built-up roofs. Asphalt ages through photo-oxidation accelerated by heat. As it ages, the asphalts melt point rises and there is a loss of plasticizers. As mass is lost, the asphalt shrinks and forms a surface similar to alligator skin. Asphalt breaks down slowly in water, and the more exposure the more rapid the degradation. Asphalt also dissolves readily when exposed to oils and some solvents.

There are four types of roofing asphalt. Each type is created by heating and blowing with oxygen. The longer the process the higher the melt-point of the asphalt. Therefore, Type I asphalt has characteristics closest to coal tar and can only be used on dead level surfaces. Type II, is considered flat and can be applied to surfaces up to 1/4 in 12 slopes. Type III, is considered to be “steep” asphalt but is limited to slopes up to 2 in 12, and Type IV is “special steep”. The drawback is, the longer it is processed, the shorter the life. Dead level roofs where Type I asphalt was used as the flood and gravel adhesive has performed nearly as well as Coal Tar. Asphalt roofs are also sustainable by restoring the life cycle by making repairs and re-coating with compatible products. The process can be repeated as necessary at a significant cost savings with very little impact on the environment.

Asphalt BUR is made up of multiple layers of reinforcing plies and asphalt forming a redundancy of waterproofing layers. The reflectivity of built up roofs depend on the surfacing material used. Gravel is the most common and they are referred to as asphalt and gravel roofs. Asphalt degradation is a growing concern. UV-rays oxidize the surface of the asphalt and produces a chalk-like residue. As plasticizers leach out of the asphalt, asphalt built up roofs becomes brittle. Cracking and alligatoring inevitably follows, allowing water to penetrate the system causing blisters, cracks and leaks. Compared to other systems, installation of asphalt roofs is energy-intensive (hot processes typically use LP gas as the heat source), and contributes to atmospheric air pollution (toxic, and green-house gases are lost from the asphalt during installation). 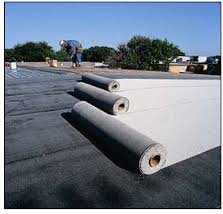 A bitumen is a term applied to both coal tar pitch and asphalt products. Modified Bitumens were developed in Europe in the 1970s when Europeans became concerned with the lower performance standards of roofing asphalt. Modifiers were added to replace the plasticizers that had been removed by advanced methods in the distillation process. The two most common modifiers are APP (attactic polypropylene) from Italy and SBS (styrene-butadiene-styrene) from France. The United States started developing modified bitumen compounds in the late 1970s and early 1980s. APP was added to asphalt to enhance aging characteristics and was applied to polyester, fiberglass, or polyester and fiberglass membranes to form a sheet good, cut in manageable lengths for handling. Usually applied by heating up the underside of the roll with a torch provided a significant fire hazard and was outlawed in some municipalities when buildings caught fire and some burnt to the ground. Another problem developed when a lack of standards allowed some manufacturers to produce goods with amounts of APP insufficient to enhance the aging characteristics. SBS is used as a modifier for enhancing substandard asphalt and provides a degree of flexibility much like rubber. It also is applied to a myriad of carriers and produced as a sheet-good in rolls that can be easily handled. SEBS – (styrene ethylene butadiene styrene) is a relatively new formulation increasing flexibility of the sheet and longevity.

Turbo Seal is a self healing gel like membrane that never cures. Made of 45% recycled tire rubber, it goes on top of existing tar (asphalt) roofs then capped with a sheet membrane. 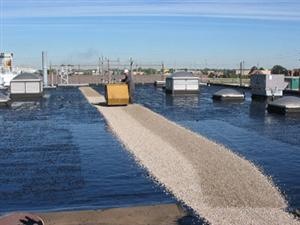 Coal Tar Pitch is a known carcinogen, forbidden by code in some areas. When installing and patching existing coal tar roofs, worker and building occupant exposure should be avoided, or minimized to the maximum extent possible. Coal Tar fumes are hazardous and provisions must be made during application to prevent fumes from getting into the building. Workers should wear protective equipment and clothing, and commonly get higher compensation (Pitch Pay) for exposure to the health risks.

Coal Tar is an aromatic hydrocarbon and a by-product from the coking process of the coal industry. It is historically in abundance where coal is used in steel manufacturing. It ages very slowly through volatilization and is an excellent waterproofing and oil resistant product. Roofs are manufactured by heating the coal tar and applying between layers of coal tar saturated felts. It has limitations to application on dead level or flat roofs with slopes less than 1/4 in 12. It has a tendency to soften in warm temperatures and “heal” itself. It is typically ballasted with gravel to provide a walking surface, however a mineral surface membrane is available. Coal Tar provides an extremely long life cycle that is sustainable and renewable. It takes energy to manufacture and to construct a roof with it but its proven longevity with periodic maintenance provides service for many years, with ages from 50 to 70 years not uncommon, with some now performing for over a century. Currently, there are cold process (no kettle is used) coal tar pitch products that almost eliminate all fumes associated with its typical hot process version.

Coal tar pitch is often confused with asphalt, and asphalt with coal tar pitch. Although they are both black and both are melted in a kettle when used in roofing, that is where the similarity stops.